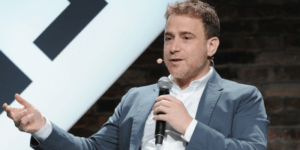 Slack, the popular work chat app, has raised $427 million in venture capital at a valuation of more than $7 billion, according to a news release.
All told, Slack has raised about $1.27 billion in venture capital – including in a $250 million mega-round led by SoftBank in September 2017 that gave it a $5 billion valuation at the time.
Its latest valuation makes it that much more expensive for a larger tech company to buy it and, thus, at least a little more difficult for a sale to happen. But it’s also been coy about going public, raising questions about the master plan.
All the while, Microsoft has been reinforcing Microsoft Teams, its own work chat product.
Slack, the work chat app that has become a poster child for Silicon Valley startup success, is on something of a hot streak.

First, Slack bought the intellectual property to Atlassian’s HipChat, which had been one of its chief rivals. Then, no less than Microsoft recognized Slack as a major rival to the Microsoft Office suite in an official regulatory filing.

Now, Slack can add one more to its win column, as it takes in a whopping $427 million in an investment round led by Dragoneer Investment Group and General Atlantic, with participation from T. Rowe Price, Wellington Management, and others, including its existing roster of investors.

This investment, in turn, leads to two other figures of interest: Slack is now valued at “more than $7.1 billion,” according to a news release. And now, all told, Slack has raised just about $1.27 billion of venture capital. That includes the $250 million mega-round it took back in September at a $5 billion valuation in a deal led by SoftBank.

More money means more questions
This funding round raises some questions for the future of Slack.

A $7.1 billion valuation makes it that much more difficult for Slack to be bought by a big tech company. If Amazon, for example, were to revisit its reported interest in buying Slack, it would most likely have to pay a big premium over that valuation. Even for a gigantic tech company like Amazon, that would be a hefty price tag.

At the same time, Slack has played coy about going public, declining to announce any plans one way or the other. With so much money going into the startup, though, some kind of exit seems likely sooner rather than later.

And all the while, Slack is facing down the continued threat of Microsoft, whose Microsoft Teams product comes bundled with the mega-popular Office 365 productivity suite for businesses. While Slack has its fair share of superfans and champions, Microsoft wields significant might in this market, and the startup has its work cut out for it.

Microsoft hasn’t taken this lying down, either, and has made moves to make Teams more competitive with Skype – most recently, launching a free version of Microsoft Teams meant to hook in smaller groups and eventually lure them to the paid version.

So while the ability to raise so much cash so quickly is a definite feather in the company’s cap, it now falls on Slack to show the world that it can take on its much larger competitor … and win.